It was July – August 2019, I was in Hong Kong and Hong Kong was witnessing one of its most prolific protests against the Chinese government. This is when I heard about how youngsters and college students were using technology differently. To overcome restrictions put across by the HK and Chinese government authorities. Hongkong protestors were primarily using different types of application lihkg,firechat, and Bridgefy.
Bridgefy was primarily an application SDK launched for or mesh network communication with an early target of corporate and natural disasters usage. But same technology of Mesh networks which is used in Bridgefy has come to rescue the protestors in various countries and locations.
Temporary suspension of Internet Services, blocking of the internet, blocking of applications, forcing application stores to ban apps has been a go-to strategy of both democratic governments and authoritarian governments to overcome opposition and dissent. This is where we see the use of Bridgefy which does not use the internet for Telephone Network for sending messages or any form of communication. 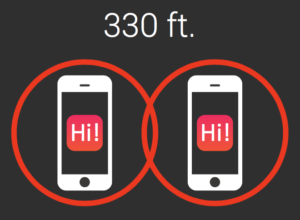 Bridgefy uses the Bluetooth connection between two phones to communicate and send messages up to 100 meters. When two or more phones are connected to the Bridgefy network it forms a mesh network to communicate over a much larger distance and more devices.

So far Bridgefy has been used largely in Hongkong Protests, Myanmar Pro-Democracy protests, Thailand protests. Iran, Iraq, Turkey, India, Russia, Thailand.
Bridgefy had seen at least 1 million downloads during the Hong Kong protest. It added another 1 million downloads after Myanmar democratic protest in 2021.
Which other protests might drive more adoption of Bridgefy amongst users?
All these sites have witnessed a disruption or temporary suspension of network and internet services.

Military Junta has again overtaken power in Myanmar in the first week of Feb 2021 from democratic parties.
This has driven the usage of Bridgefy by almost 1 million users in a week. This will continue to grow significantly as people’s opposition to the military junta increases in Myanmar.

The Russian government is facing massive anti-Putin protests in the first week of Feb 2021. Tens of thousands of people marched in more than 100 cities and towns during January in support of anti-corruption crusader Alexei Navalny. The turnout is unusual in a country where political protests in the past 2 decades have been concentrated in big cities.

The 2020–2021 Indian farmers’ protest is an ongoing protest against three farm acts that were passed by the Parliament of India in September 2020.
Farmer unions and their representatives have demanded that the laws be repealed and will not accept anything short of it. Over 159 farmers are dead since 27 January 2021, including 7 suicides, hundreds injured.

For over month students and teachers at Turkey’s Bogazici University, which is one of the most prestigious universities in the country have been protesting against the appointment of a former political candidate and academic as the Istanbul-based university’s rector.
Let’s understand the technology behind Bridgefy and why it is a choice among protestors all around the world.
Bridgefy uses Bluetooth antennas by leveraging technology called Bluetooth Low-Energy, which allows it to connect Android and iOS devices.

The differences between Bridgefy SDK and Bridgefy App are easy to understand:

The most important question:- Is bridgefy safe to use for protestors.
Since October 2020 Bridgefy team implemented a famous end-to-end encryption protocol “SIGNAL” to safeguard the users. Which has helped them in achieving the following capabilities.

Various other business and leisure activity usage of Bridgefy can be defined in the following way.